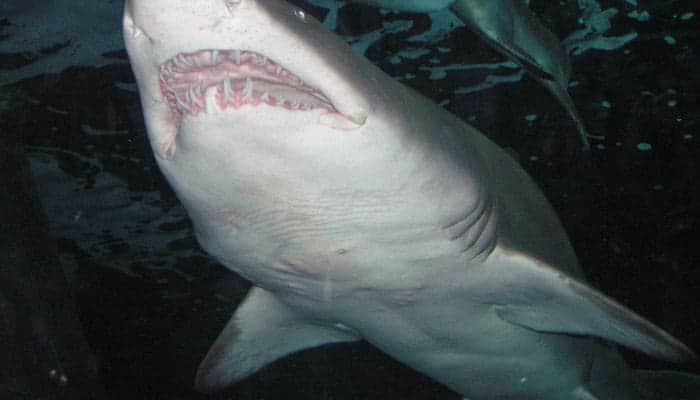 The animal kingdom is full of fascinating creatures, so it should come as no surprise that there are good number out there with teeth that seem completely strange when compared to ours. Here are some of our favorites:

Being face to face with a shark and its menacing, sharp teeth is the stuff of nightmares. But it’s not just their scare appeal that makes them interesting. Their teeth are oriented in rows, which can range from 5 in number to 50. Even more unusual is that sharks are known for losing at least one tooth a week (an easier feat seeing as their teeth aren’t attached to gums on a root like ours are).

If you’ve ever tried to feed a group of geese or ducks at a park, you may have had that momentary feeling of panic when they start to flock at you. Well, you should be extra careful if you happen to try this around a goosander. Goosanders have extra-sharp, saw-like teeth that they use to get fish.

Would you believe that aquatic snails, sometimes referred to as limpets, have teeth? It’s true, and it gets crazier! They can have literally thousands of teeth, with the average being around 12,000. Some have even been shown to have 20,000. And these teeth are made of some of the strongest material in the natural world, beating out spider silk.

Narwhals look like they came straight out of a fantasy story with their long, spiral tusks. Many people don’t realize that this tusk is actually a tooth — a protruding canine tooth. This tooth continues to grow over the years and can get to be between 5 and 10 feet long. They also have a second tooth that more often than not is impacted. If a narwhal happens to develop their second tusk, it’s often shorter than the first.

Want to make sure your own teeth don’t become strange or frightening specimens of their own? Keep up with your routine dental check-ups to keep your smile in tip-top shape! Contact Cary Family Dental today to make an appointment.